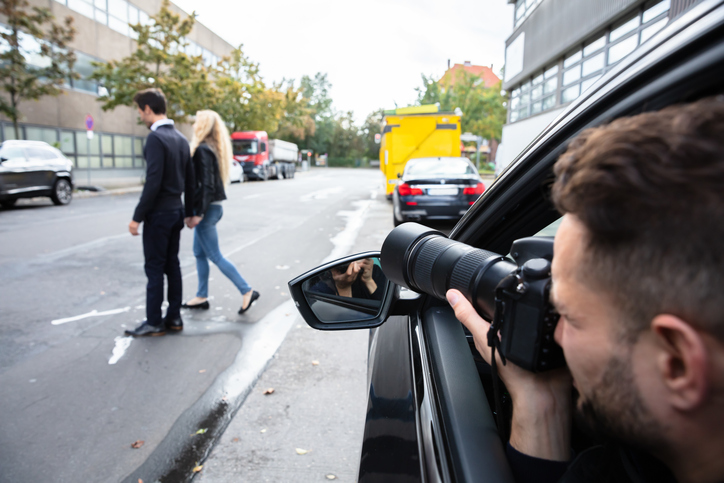 If you’ve ever wondered what your teenager was really up to, if your spouse really had a Tuesday night meeting, or if your nanny is taking good care of your toddler, you’ve probably considered spying to find out the truth. While the thought has entered almost everyone’s mind at one time or another, others struggle with the idea of spying on someone that they feel they should automatically trust.

The idea of spying on someone can leave you feeling conflicted. After all, isn’t spying an invasion of privacy? You may wonder, “How would I feel if someone was spying on me?” That’s a perfectly legitimate question, but sometimes the only way to find the truth so you can put an issue to rest and regain your peace of mind is to hire a professional who can settle the matter once and for all.

Will I Ever Be Able to Trust Him Until I Know for Sure?

While this may not be true in your case, studies have reported that around 30–40% of unmarried relationships and 18–20% of marriages see at least one incident of sexual infidelity.

Renowned therapist and author Peggy Vaughan‘s research in his handbook had reported that nearly 60% of men and 40% of women are inclined to cheat at least once in their marriage. Although, what might render you some amusement is that despite the prevalence of cheating, more than 70% of married women and 54% of married men are not aware of their not spouse’s infidelity. And that’s exactly where Private Investigators play a hand!

The decision to hire a private detective to spy on a spouse is one that weighs heavily on anyone who has ever felt they had reason to do so. Anyone who has wrestled with the idea of working up the nerve to call in a PI will tell you that you can expect everyone from your friends to your marriage counselor to chime in on the subject with opinions that run the gamut.

But ultimately, it is your marriage and your peace of mind that is at stake, so you need to make the decision on your own – confidently and most importantly putting your mind into this for all the right reasons.

The best way to come to terms with your decision is to honestly answer the questions that typically arise when facing the prospect of spying.

Can I resolve my concerns without calling in a PI? …

First ask yourself “If I confront my spouse outright, will they admit the truth?” If you’ve already done this or have come to the conclusion that there is absolutely no way they would confess their crimes, you’ve just put a check in the pro column.

If he is cheating, what are the risks to me? …

Next, if your spouse is cheating, are they putting your life at risk? In his essay, Dr. Standler points to the very real possibility that a cheating spouse can expose the innocent spouse to sexually transmitted diseases by engaging in extramarital sexual encounters.

In this case, you would have every right to know if you have been exposed to a disease that can have adverse health effects, or even put your life at risk. This is more than a right; this is self-preservation and survival, and something that carries even more weight if you have kids.

Do I need to settle this question in order to trust him again? …

Another question to ask yourself is “Will I ever be able to trust him until I know for sure?” If the answer is a resounding “no,” then retaining the services of a private detective can be the best way to find a sense of peace.

When someone feels their spouse is having an affair, the constant stress and uneasiness that comes with that suspicion can be destructive to the entire family unit.

Sometimes the best answer is to swallow your apprehension and find out once and for all. At worst, a private detective can affirm what you’ve thought all along and you can confront your spouse or go on your own way.

At best, your fears can be put to rest once and for all. With a much better perspective and composure, you can hopefully find peace in your relationship once again. At worst, you will learn the heartbreaking truth that you need to get yourself out of a marriage where the bond of trust has been broken.

If you feel that your spouse is cheating, one very important question that should be examined is, is spying on your spouse an invasion of privacy? The answer to that is likely a resounding “yes.”

Spying is usually synonymous with privacy invasion. But when are you really crossing the line when there is a reasonable cause for suspicion and you need to find answers to questions in order to protect yourself and your children?

In 2012 Massachusetts attorney Dr. Ronald B. Standler wrote an in-depth essay detailing not only the ethics but the legality of spying on a spouse. From a legal standpoint, Dr. Standler addresses questions about when someone has the right to invade the privacy of a spouse. One point that stands out is that in many states adultery is a legal ground for divorce.

Dr. Standler states that “concealment of adultery is a fraud on the innocent spouse.” If a spouse is spying for the sole purpose of finding out the truth about suspected adultery, they are likely well within their legal rights, depending on the extent of the investigation.

For instance, if a private investigator happens to take a picture of a man entering a local motel with someone other than his wife, this is likely confirmation of wrongdoing, while taking the picture is still well within most privacy laws since the photo is being taken in public space.

Wiretapping, however, is not a legal means of spying and can cause the spying spouse, as well as the private detective, to face criminal charges. The Federal Wiretap Act was put in place to protect individual’s communications and to allow criminal and civil penalties against those who violate it. A private investigator is not allowed to install software, spyware, or use other means of monitoring and listening in on your spouse’s communications.

There are many examples of lawsuits brought upon not only the spying spouse but in some cases against a rogue private investigator who engaged in wiretapping. In 1976 at the request of Joan White, private detective Harl Weiss planted wiretapping equipment in the home of her husband Duane, uncovering an illicit affair. Weiss was the subject of a lawsuit in which the conversations recorded were found to be in violation of state law.

In other cases, lawsuits have been filed against those who monitored and recorded conversations between their child and the opposing spouse. The legality is complicated and costly; therefore, wiretapping is never considered an option any private detective worth their salt would use.

Still on the Fence? … Take the Advice of Someone Who Has Been There

If you’re still struggling to find comfort in your decision to hire a private detective to confirm your spouse is cheating, take note of Helen Gunn’s experience.

Helen spent seven months thinking that her husband was cheating. These weren’t just any seven months; these were seven months during her pregnancy with her first child with her then-husband, Dan.

Though she had tried to confront Dan about her suspicions, Dan denied any wrongdoing and instead set to the task of making Helen feel as though she was not only wrong but delusional. In fact, as she lay in the hospital with their newborn baby in her arms and Dan sitting by her side, a text came in on his phone from the other woman.

“I felt sick as I dialed the detective, Jon Riding, but for my own sanity I had to know whether my suspicions about Dan were right,” confided Helen. “But, sure enough, when I was at my wits’ end, driven to hiring a private detective, he found evidence that everything I suspected was correct.”

In Helen’s case, hiring a private detective was not only the right choice, it was the only choice. Despite having caught her husband in dozens of lies, Dan continued to deny any wrongdoing when she confronted him, so this was not something that was going to be settled just between the two of them. In her own words, she felt the only way to keep her sanity was to hire a private investigator to get conclusive proof once and for all.

In another case, Jane Phelan retained the services of a private investigator when she felt sure her husband was cheating on her. She was so sure of this that despite investigators following her husband on nine separate occasions and coming up empty-handed, she sent them to follow him one more time.

It turned out that the tenth time was the charm. Investigators observed her husband in a bar hugging and kissing another woman. Not just any woman, but his boss’ daughter. The couple proceeded to walk to a hotel nearby and after checking out, the husband threw the receipt away. The PI promptly retrieved the receipt and delivered it to Jane along with video evidence of the two of them entering and leaving the hotel.

Soon after, Jane received a nice settlement in divorce court thanks to her irrefutable proof of adultery on her husband’s part.

In this case, it is obvious that Jane’s husband took great pains to hide his infidelity and it took considerable effort even from professional private investigators to finally catch him in the act. In such situations, it is in your best interest to trust your private investigator and let them do the spying for you without crossing any legal barriers.

What’s the Difference Who Spies?

You may already be doing your own freeform spying on your spouse by checking their email, text messages, or following them around. After all, how are you going to determine the truth if there isn’t some amount of spying done?

If this is the case, the better option may be to bring in a third party to do the dirty work for you. A private investigator will only use legal and ethical methods for collecting evidence on a cheating spouse whereas a suspicious spouse playing amateur detective may take the spying too far and find themselves on the wrong end of a criminal suit. Additionally, your spying efforts are likely to leave countless clues that will tip off your spouse, allowing them the opportunity to cover their tracks.

In the end, ask yourself, “What’s the difference between who spies?” If you need the answers, it may be in everyone’s best interest to hire a private investigator to ensure privacy laws are not violated along the way and to ensure the evidence collected is admissible as evidence in court– if that’s what it comes down to.